Thermoforming experts follow the process of shaping plastic parts from a softened thermoplastic sheet.
The process starts by heating a plastic sheet and then shaping it according to the mould. Let’s see the creation process in detail.

Thermoforming lines: the beginning of the process

The process begins with the foil transportation chain. Here, the reel of material to be processed is mounted on an unwinding device that with pinpoint precision feeds the right amount of sheet required. There are two guides, which convey the material to the toothed transport chains. The teeth of the chain puncture the sheet on the two side edges. Meanwhile, the sheet is conveyed into the machine, passing between two heater panels, one above and one below. These panels contain a series of electrical infra-red ceramic heating elements, that bring the sheet to the “softening” temperature required for the moulding of the piece. The temperature depends on the material used, and thickness, and can be independently adjusted using the machine touchscreen control panel. 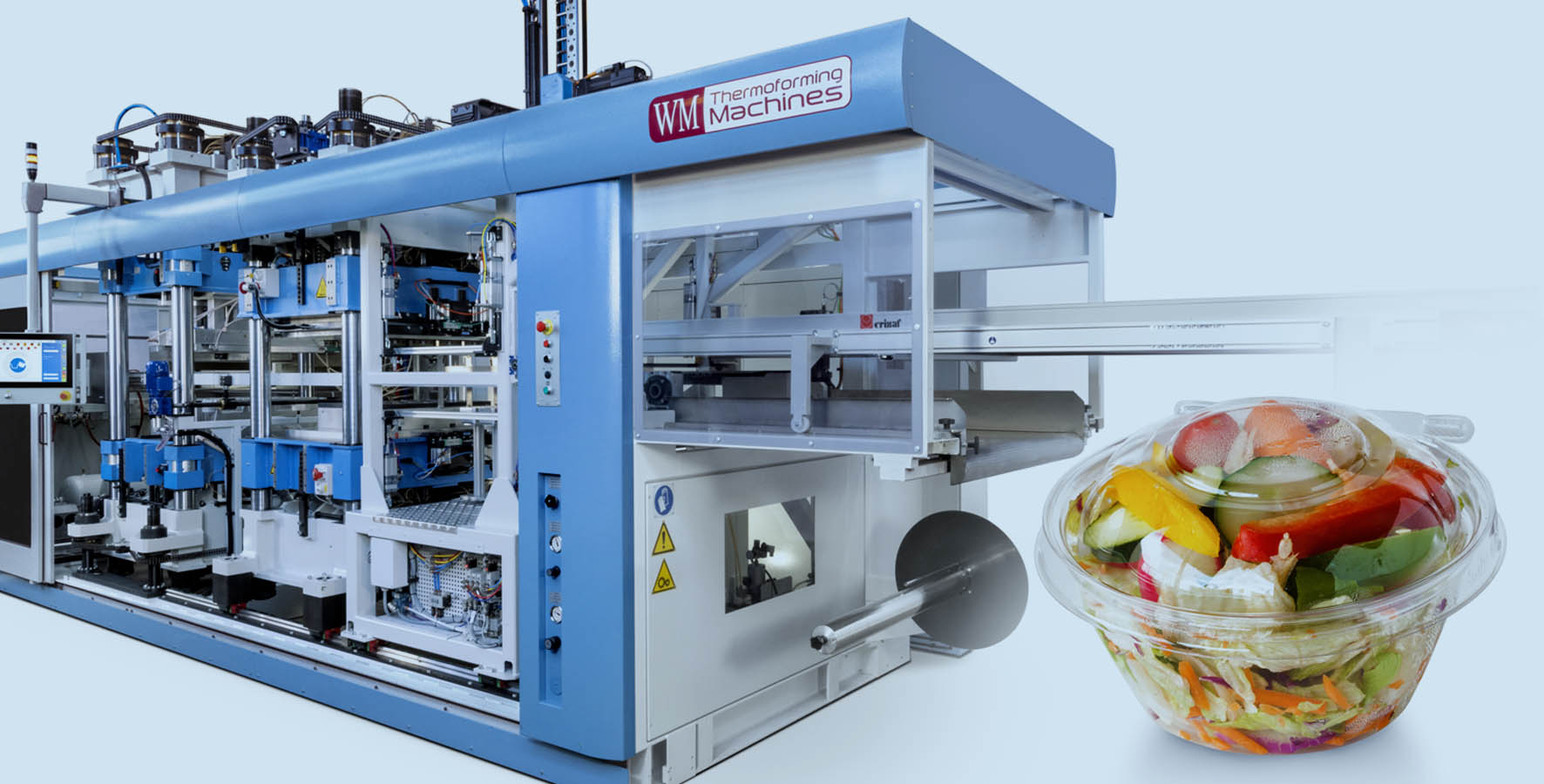 The chain-rails guide the heated sheet through the forming mould. The mould consists of two halves, of which each is mounted on a movable platen of a vertical toggle press. When the mould is closed, a jet of compressed air (sometimes in combination with vacuum) forces the softened sheet to take the shape of the inner walls of the mould. The mould is cooled through a circuit of water channels. When the it opens, the toothed chains transport the sheet with the products still attached to it to the next step, the cutting station.

The steel blade cutting tool part is called “knife” and is normally heated by means of a special plate with electric resistors, in order to obtain a clean cut (without hairs and burrs) and reduce the force required to cut the sheet. On the perimeter of the cutting knife blade, there are small notches (normally four). Where there is a notch in the blade it will not cut the sheet, and the product will remain attached to the sheet by the uncut four perimeter points. These points are called “witness marks” or “tags”. The cut pieces remain attached to the sheet, by these tags, while the sheet continues its path through the machine to the final stacking station.

The stacker consists of two parts:

There is also another process called “forming with simultaneous in-mould punching, or more simply “punch-and-die”. This second system has a major difference compared to the previous process, which is the type of mould used. In this case, the mould is made from steel and has a “male” and “female”part, better known as “punch” and “die” and both forming and cutting happen in the same station. The system ensures greater precision of the perimeter cut because the process happens in the same station without moving the sheet, and there is no material shrinkage. In punch-and-die machines, the two mould parts enter one inside the other, and the result is a “scissor cut”: a perfect, flawless cut. 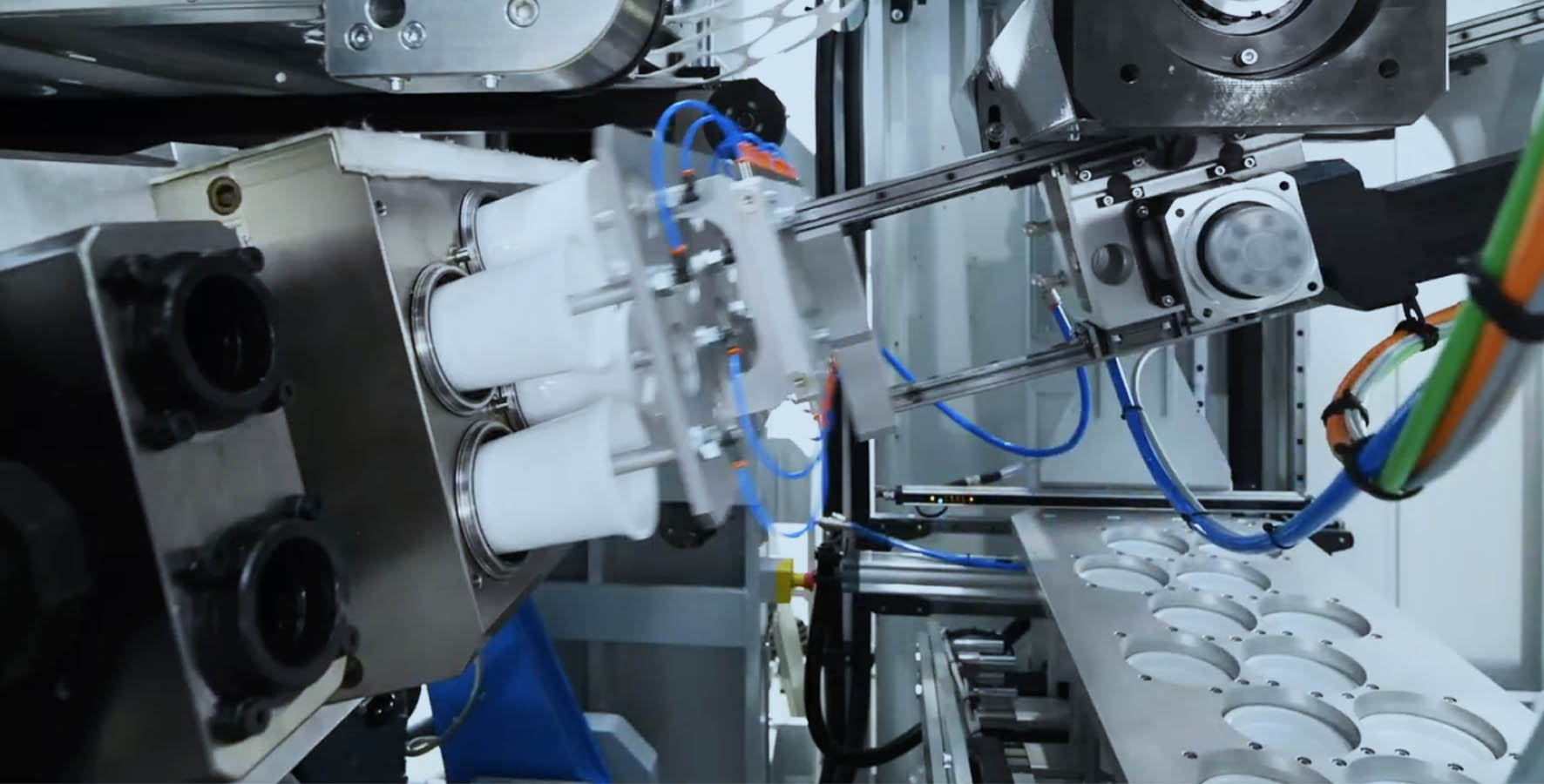 The advantages of thermoforming

Thermoforming is perfect for a wide range of products, and every company has its specialization. However, there are some clear, undeniable advantages:

We use cookies to ensure that we give you the best experience on our website. If you continue to use this site we will assume that you are happy with it.OkNoPrivacy policy
Go to Top